Paulina, Samuel, Hazel and Andrea in front of the Tajmahal

It may be mentioned that an earlier batch consisting of Yanira, Alberto, Luis and Nivardo from the same university created the ground work for a solid campaign to save electricity in 2011.
The present batch not only continued the pioneering work started by their predecessors, they also branched off into newer frontiers. Along with the sustained campaign on electricity, the group worked every day on a ground-breaking Organic Demo-farm under the guidance of Ms Margaret Molomoo. Every day four of them were seen working in the field vying with one another in this creative act of caring for the Earth. “While we contributed to make the farm going, I thought my muscles got good exercise and my body a good tanning!” smiled Samuel Oblitas recalling the farm drive.

Planting Season for the Onions: Specially flooded plot of the farm

When they harvested Potatoes this year, there was so much excitement in the Bio-reserve. From a small experimental patch, the Earth gifted the students with a total of 300 odd kilograms of organic potatoes. Sitting around a bonfire, the students and Tarumitra team baked a potful of potatoes as an expression of thanksgiving. “Baking potatoes in the winter evening right on firewood was totally refreshing” commented Hazel. 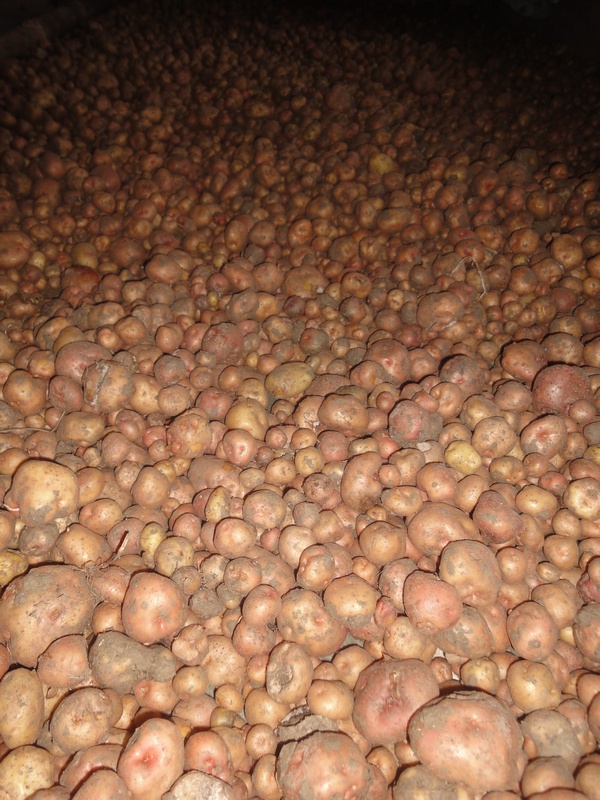 Freshly harvested Organic Potatoes: many said that they tasted better!

They helped Margaret to experiment with bio-pesticides to control the Cut worms who created havoc in the field. These worms slated to become butterflies would come out and scissor off the plants put in by the team. To their surprise the black Drongos ate up the worms faster than they ever thought. The students then planted dry branches of trees all along the field for the birds to perch in the evenings and control the worms. “ The agricultural practices in India have been a learning experience” said Andre Fion. “ I never realized that Natural pest-controllers like birds could be invited to our farms!”

Lalita, Sanju and Margaret (wearing a sunshade) putting in dry branches for birds like Drongo to perch in the evenings

Harvesting time brought in waves of excitement. Each time the visiting students got a chance to taste the tomatoes, cucumbers and other vegetables. The Zamorano students turned up early morning for the regular chores in the garden. A number of visiting farmers sought out details of the experiments in the farm.  Students of the next door St. Xavier’s college too chipped in with voluntary labour and ideas.

Many a vegetable turned up from the organic Farm every day: Ms Margaret with fresh giant radishes!

Andre, Hazel, Sam and Paulina also travelled to other cities. The ancient city of Varanasi (Banaras), the city of Tajmahal, Agra, Region of tea gardens, Bagdogra, the hill-city of Darjeeling, the City of Joy, Kolkata and the Capital of the country, Delhi were some of the places the group visited and lectured on the need to save electricity.

The Vishwajyoti Communications guided the four to visit schools in Varanasi where each of the enthusiastic students promised to save 100watts of power every day. 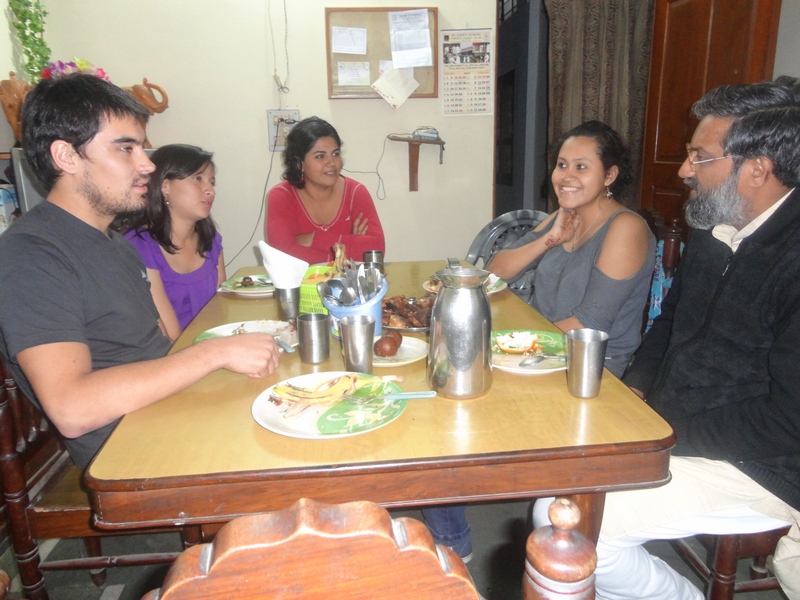 Four of them also met with the United Nations campaign girl Shweta Marandi and saw for themselves how high school level students can change the course of history.
Tarumitra Campaign Manager, Dr (Sr) Mudita Sodder got their assistance to organize an ART from WASTE exhibition in the Bio-reserve. Over 200 students from 20 schools participated in the day long program where the boys and girls converted waste materials to Art pieces. 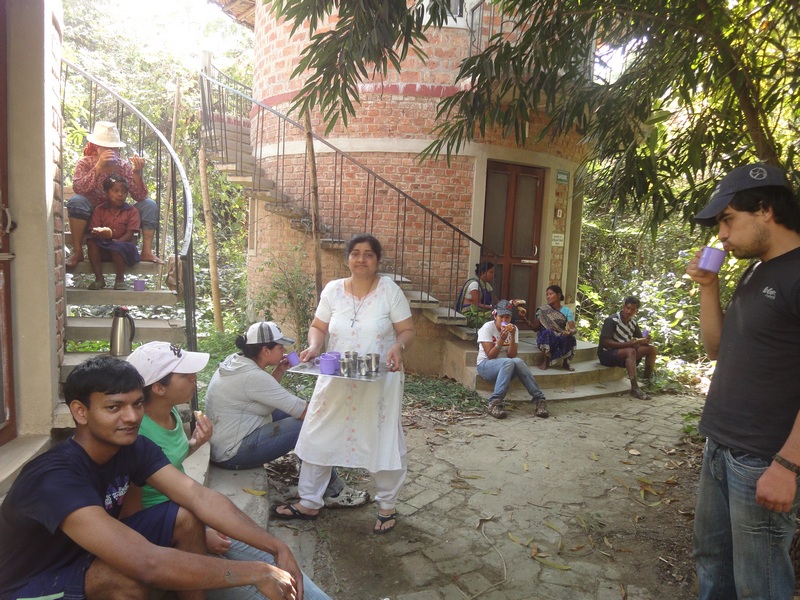 Paulina Comacho, an ace artist made a set of ear rings fashioned out of plastic bottles. The visitors found them absorbing. The local Hindi daily, iNEXT brought out a front page coverage of Paulina sporting the colourful ear rings. She was also one of the judges at the exhibition.

Hazel and Samuel were in charge of a Sky Shop to sell carry bags made of bio-degradable cloth bags. The Deputy Chief Minister of Bihar, Sushil Kumar Modi found the concept of the sky shope from a tree house amusing enough to purchase some bags for himself.

Andre welcomed the arriving students on the Registration desk and arranged for their refreshments with help from the two student interns from Belgium Jens and Willem. She also accompanied the honorable judges who assessed the art works. 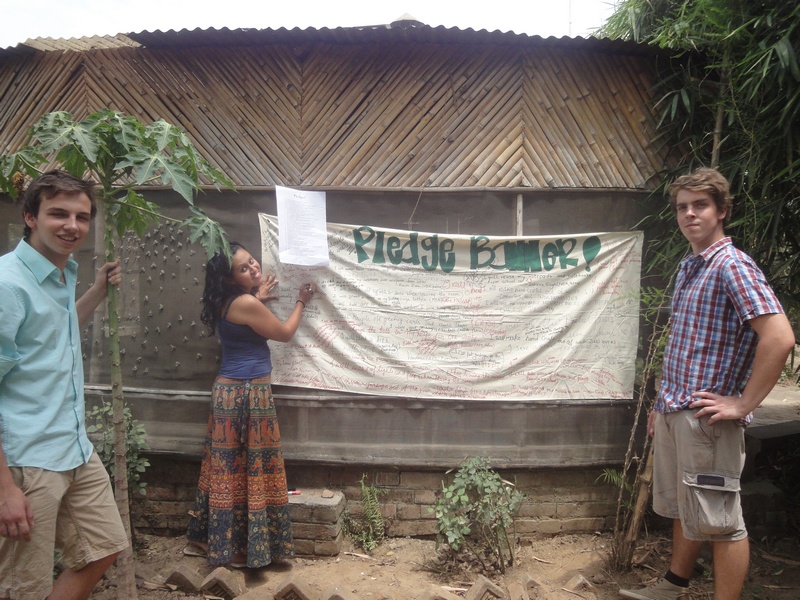 Andre Fion charmed the visitors to make a pledge to save environment: Jens and Willem, Interns from Belgium look on

The Zamorano students got a chance to address many groups who visited the Bio-reserve: With students from St. Joseph’s Patna

The Zamorano students finally bid farewell to Tarumitra on 20 April after a round of visits of the schools in the national capital Delhi. ” Looking back, I have a feeling that Tarumitra experienced a heightened sense of inter nationality when the Zamorano students shared our roof!” opined Ms Margaret Molomoo. Definitely we have. “The globe became a village when ever we sat around  with them around the winter fires this year!” ruminated the Green architect Fr. Joe Parekattil S.J

Communication Specialist Rappai Poothokaren SJ concelebrated with the group a Winter evening around a bonfire!

“We all miss the four!” said Sr. Prema SCC who shared many a joyful moment with them.  Prema remembered nostalgically two of the birthday celebrations the students shared at Tarumitra.